When we age, some of our senses naturally decline as the years pass, through no fault of our own. Of course, losing a little of our hearing is considered par for the course as we grow older, but once we pass the age of 55, we're far more at risk of encountering hearing loss, according to My Aged Care.

Dilworth Hearing, an Australasian-based medical group, builds on this by stating that 50 to 60 per cent of the population aged over 60 have some level of hearing impairment, which can markedly impact on their quality of life.

Now, a study has found that the personality of those who suffer from hearing loss, may well have changed as a direct result of their disability. How did the researchers behind the evidence come to this conclusion?

The broad ranging study by academics at the University of Gothenburg analysed 400 men and women aged between 80 and 98, over a period of six years.

At two-year intervals, the participants were given mental and physical examinations, as well as psychological tests. These were employed to determine such traits as introversion, emotional stability and a great many other aspects in an effort to determine whether or not physical or cognitive deterioration could cause an individual to become less outgoing and refrain from social activities.

It was discovered that the only factor to cause a marked increase in introversion – choosing to withdraw from social situations and keep to themselves – was loss of hearing, much to the surprise of those that carried out the study. Hence, those who suffered from hearing loss are at greater risk of living in isolation.

"To our knowledge, this is the first time a link between hearing and personality changes has been established in longitudinal studies. Surprisingly, we did not find that declining overall health and functional capacity make people less outgoing. But hearing loss directly affects the quality of social situations," said Dr Anne Ingeborg, one of the authors of the study.

What's more, the use of devices such as hearing aids had little effect on the correlation, which could mean that users of such technologies may well need extra tuition on precisely how they work.

In conclusion, the academics felt that greater emphasis was needed in diagnosing and treating deteriorating hearing for those in senior living. It is hoped that such measures will help older people retain their outgoing nature.

Luckily, our Newcastle retirement villages have great access to excellent medical care, so those living here will be able to combine good health with a sense of happy, active living! 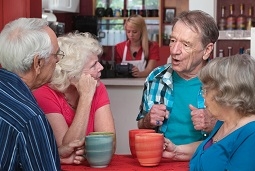