Could swimming be the most suitable exercise for senior citizens?

As we grow older, day-to-day tasks that we took for granted in our younger days become more of a challenge. Mobility and range of movement are two such things that can deteriorate as the years add up, and falling over, whether tripping over a step or falling down the stairs, represents one of the largest risks for those in senior living.

Hence, it's important that we take precautions to help minimise the risk of falls occurring, and a new study claims that the best way to do this is through regular swimming.

The study, carried out by researchers from the University of Western Sydney (UWS), analysed some 1,700 males aged 70 and above. They asked the men which kinds of exercise that they performed, and also measured how many times they fell during a four-year time span – with over 2,700 tumbles recorded.

The intriguing results found that those who swam regularly were up to 33 per cent less likely to fall over, as opposed to men that played golf, ran on a treadmill or played lawn bowls – but why is this?

"Unlike with land-based sports, swimmers are required to create their own base of support and at the same time, to produce a coordinated movement of both upper and lower extremities," Dafna Merom, professor of physical activity and health at USW, told Live Science.

Though the study only analysed males, the study's authors felt that female swimmers would enjoy even greater benefits, as women, in general, have less muscle mass than men.

But why is the water-based activity so effective at reducing the chances of a fall?

It's because swimming is notable as being a great all-round exercise, with minimal impacts on the joints. By taking a regular dip, swimmers can build a sturdy, strong core, the muscles of which are used for controlling balance – seriously helpful in preventing a stumble.

Not only is swimming a great way to counter the risk of falling, it's also a fantastic activity for a whole raft of other reasons. This is because it's a fun, sociable way to get a good cardiovascular workout, getting the heart pumping and helping circulation.

Luckily, the city of Newcastle has plenty of swimming pools for you to dip your toes into, so done your cossie and jump right in – the water's fine! 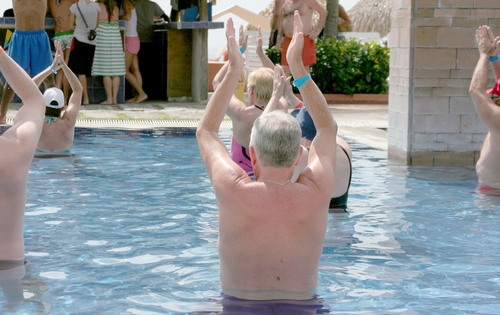