How can Australia’s senior citizens improve their diet?

There are a great many factors that can contribute to better health in Australia’s senior citizens. Being fit and healthy isn’t just a case of keeping a good sense of active living – though it certainly helps – as a decent diet and nutrition also go some way to ensuring that those ageing in place are as physically well as possible. So, are retirees in Australia eating as well as they can be?

According to figures released by the Australian Institute of Health and Welfare, it would appear not. The report states that there are some 1 million Australians over the age of 55 that are obese – that’s one in five of them. What’s more, the same group, on average, tip the scales to the tune of an extra 6-7 kilograms than did their counterparts of 20 years ago, and it’s no secret that obesity can lead to a whole raft of negative health conditions. So how can those in senior living make sure that they are eating properly?

Nutrition Australia states that there are several specific guidelines that the country’s retirees should follow when it comes to their diet, and none of them are particularly difficult to adhere to – you won’t have to give up your weekly fish and chips Friday treat just yet! Let’s take a look at a few of these:

Cut out the fat

The human body needs fat, as it is used to store energy and provide padding for vital organs. However, too much of it can cause us to gain weight, clog arteries and put extra pressure on the heart, which is bad news for anyone, let alone the elderly.

Hence, you should enjoy foods such as chocolate, pies and fries only very occasionally, as well as lowering your overall sugar intake. Try to wean yourself off that extra spoonful in your tea – honey is a healthy alternative! Wholegrain cakes are also a healthier option if you’ve a sweet tooth that’s hard to calm!

The element which brings life is used for just about everything in our bodies, from digestion to giving our body a hearty rinse through hydration.

According to Authority Nutrition, we should try to drink eight 8-ounce glasses of water per day – that’s about 2 litres. This is known as the ‘8×8’ rule, making it easy to remember!

Power nutrients to partake in

SA Health have produced a handy list of nutrients that are of specific benefit to the elderly. Try and opt for foods that are high in fibre, protein and calcium. Additionally, Vitamin D – found in oily fish and a wealth of dairy products – is great for bone health! 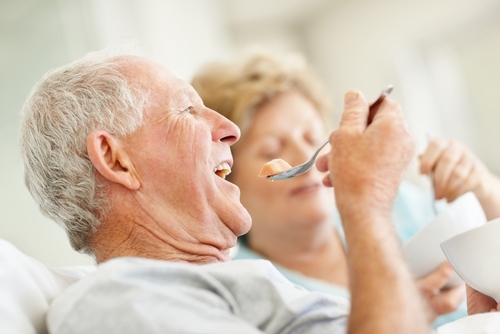