How does owning a pet benefit senior health?

Owning a pet can be one of the most satisfying experiences one can have in life, perhaps only short of raising a child. You get to care for a fluffy creature that both adores and looks up to you as you feed it, exercise it or simply play with it.

No matter if you live alone or with your partner in your Newcastle retirement village, having a pet companion can be a hugely rewarding experience, especially if you miss having the kids around. Does owning a pet have any other benefits for seniors? Considering Sugar Valley allows them, let's take a look at how pets might help your health.

There aren't as many studies that delve into the physical benefits of pet ownership as the mental benefits, though that doesn't mean there are none. The University of St. Andrews performed a study into how caring for a pet, particularly a dog, might help improve senior living.

The study was published in the Preventative Medicine journal and led by Dr. Zhiqiang Feng. Dr. Feng said, "Our results show that dog ownership is associated with an increased level of physical activity in the over-65s. On average, older dog owners were 12 per cent more active than their counterparts who did not own a dog."

Results suggest that elderly people who own a dog are more motivated to go outside and get active. Normal barriers such as a lack of social support, poor weather or safety concerns sometimes make people hesitant to leave the house and live an active lifestyle. However, a dog needs to go outside and get walked, so it encourages this beneficial activity.

There are numerous mental health benefits to owning a pet. For starters, having a companion can help you feel less isolated if you live alone. Not only does a pet, such as a cat or dog, give you something to take care of, it also provides a means of touching and cuddling that can be lost without human interaction.

One study, conducted by Joseph Schwerdt of Fort Lauderdale News, showed that 90 per cent of elderly people felt less alone and significantly happier after they adopted a pet.

Dr. Feng of the University of St. Andrews also commented on the subject, saying, "It is well known that pet ownership may help alleviate feelings of loneliness and depression in older people."

As if that wasn't enough, owning an active outdoors pet such as a dog can help you make new friends in the community, as you will happen across other dog owners, park walkers and other such people when you go for a stroll. 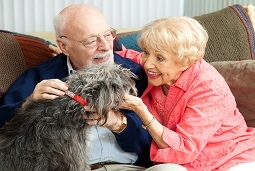