How to keep your elderly parent awake and engaged

Sleepiness and napping seem to go hand in hand with ageing, as part of the process of growing older can be having less energy.

However, excess napping during the day can hinder an elderly person's ability to live in independent lifestyle, which can lead to mental health problems and unhappiness. Sleeping for a short while during the day is both acceptable and perfectly normal, however. It becomes a problem when that same nap takes up most of the day, every day.

The following are some of the more common reasons a senior person can feel fatigued during the day.

As we grow older, we tend to sleep lighter than we did when we were younger. This means that elderly people may wake up frequently during the night, be it because they need to go to the toilet or perhaps even due to aching joints. The side effect of this disrupted sleep is that some seniors don't get enough. In fact, according to a poll conducted in the US, 44 per cent of older people suffer symptoms of insomnia a few nights a week.

There are numerous ways a senior can try to improve their sleeping habits. Here are a few.

Another possible cause of daytime fatigue could be something as simple as boredom. When a person retires, often they are simply left at home alone without a planned schedule of activities, errands or other things to keep the mind active, meaning there's no reason for it to remain at full strength. This can result in regular sleepiness, as well as more serious conditions such as depression.

To stimulate a senior's mind, encourage them to participate in their retirement community's regular social gatherings, sports and other events. Talking and engaging with people is one of the best ways to stay active, and community and friendship assists with preventing depression. An elderly person should also have a daily schedule of things to do, including both physical exercise and regular household chores. That way there won't be time for them to sit around all day. 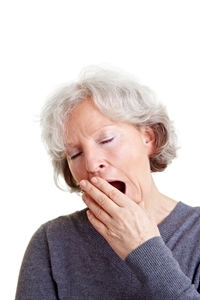