Research supports the benefits of social media for seniors

Social media use is often associated with younger generations, but as it turns out, older adults stand to benefit greatly from the use of these online networks. Social media sites such as Facebook may take some getting used to, but they are a great way to stay connected to your friends and family members. Here are a few reasons why older adults may want to consider using social media.

A recent study conducted by researchers at the University of Arizona looked at the cognitive benefits of social media use for seniors. Participants were separated into three groups: One that received Facebook training and used the site to connect with other members, one that used a private blogging platform, and one that didn't access social media at all. At the onset of the study, the researchers tested participants for feelings of social connectedness, perceptions of loneliness and cognitive abilities. These tests were then repeated after eight weeks.

The results were clear: Facebook users demonstrated a 25 per cent increase in the positive aspects associated with social media use, such as connectedness and cognitive abilities. Social media proved to be a positive tool for seniors ageing in place.

" … there is evidence to suggest that staying more cognitively engaged – learning new skills, not just becoming a couch potato when you retire but staying active – leads to better cognitive performing," Janelle Wohltmann of the University of Arizona said. "There's also a large body of literature showing that people who are more socially engaged, are less lonely, have more social support and are more socially integrated are also doing better cognitively in older age."

If you're passionate about politics, have an interest in a niche subject, or want to stay up-to-date on a particular industry, social media is the best way to do it. By 'liking' companies' and organisations' Facebook pages, you'll be able to see any updates that are posted. Facebook and Twitter have both become quick and reliable ways to read the news and conduct industry research.

Connecting with friends and family

Finally, the most obvious way social media benefits seniors – and people of all ages – is that it allows them to stay well-versed on the lives of their friends and family. Through Facebook, you will be able to see your niece's wedding photos, get back in touch with your long-lost friends from school, and be one of the first to know about new engagements, pregnancies and other happy events in your social circle. 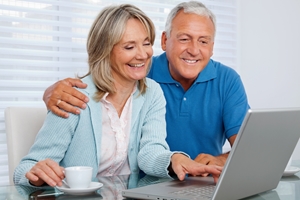