What are the benefits of drinking alcohol in your elder years?

As Australians, we live in a country where enjoying a glass of delectable red wine or a refreshing beer are par for the course in our day-to-day lives. Though drinking alcohol is perfectly acceptable if done in moderation and with responsibility, it's when the substance is abused that it can become a problem.

Indeed, according to a study released by Victoria Health, Turning Point Alcohol and Drug Centre and the Foundation for Alcohol Research and Education, up to 15 people die each day and approximately 400 per day are taken to hospital due to alcohol-related conditions.

What's more, elderly people can be even more susceptible to alcohol's effects, especially those that suffer from chronic illnesses or keep an unsuitable diet. How, then, can we ensure that we strike the right balance between enjoying a decent claret with a Sunday roast, without letting drinking become harmful as you age in place?

Drinking in moderation can stave off a raft of illnesses

If you can limit yourself to a one or two glasses of wine or beer per day, but no more, you can notably decrease the risk of coronary heart disease, dementia, diabetes, stroke and osteoporosis. Of course, as we age, we're naturally more prone to developing any of these conditions, so it's well worth doing anything you can to give yourself the best chance of protecting yourself from them.

According to the American Heart Association, red wine is your most effective alcoholic weapon against heart disease, with the risk of developing the condition is suggested decreasing by 20 per cent when one to two daily glasses are consumed.

Drinking in moderation can be healthier than being teetotal

There is mounting evidence that cases of Alzheimer's disease are lower in those that drink conservatively as opposed to those that drink nothing at all. It is believed that regularly consuming food or drink heavy in flavonoids – such as wine – can ward off dementia, and may even cut the risk of developing the condition by up to 50 per cent. Additionally, those flavonoids can also halt the decline of cognitive performance that can come with ageing, and lessen the chances of Parkinson's disease occurring.

Drinking in moderation can deliver a better quality of life

In a study carried out by the Royal Australasian College of Physicians, it was found that overall quality of life is higher among those that drink moderately when compared to those that abstain. What's more, mortality rates were also found to be lower. The study covered almost 3,000 New South Wales citizens in senior living, revealing that gentle alcohol consumption increased life expectancy, as well as quality of life, for men up to 80 years of age, whereas for women the benefits were indefinite. 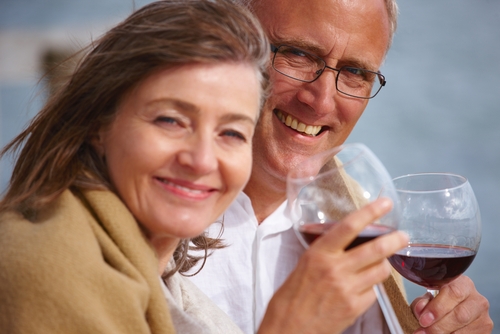